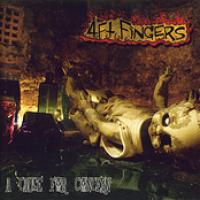 Album A Cause For Concern

For one hundred years my land's been town in two
Bigoted people think that they are fighting for you
A coded warning, a distant shooting
I've never seen an army act quite like this
A son without a father, another widow made, playing god
They banded together in 1916
Defending our island from the British regime
The people they loved them for fighting their cause
Where are the heroes now?
But every day we take one step closer to a time in our lives
Where we can't remember hate
Our lives all the time moving where we're not afraid of you.

Innocent children caught up in a war
They've lived with bombing and terror since they were born.
Their cause is replaced by greed
They keep all their guns to help them fight for their drugs
Politicians they tug at the threads of our peace
Till nothing's left but a divided race
Irish eyes aren't smiling anymore