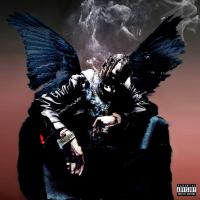 Yeah, yeah, yeah
Yeah, yeah automatic
Yeah always got it on me baby, automatic, yeah
Where I'm at is static, but it ain't got traffic, yeah
Push up on me, them boys make you do a backflip
Balance on the beam, yeah balance on the beam, yeah
Do some shit I've never seen
Won't you come out with the team, yeah
Yeah, you might just win a ring, yeah
Why they home on they homescreens?

We been hangin' outside, goin' in
Outside not goin' in
Pull up in a lambo or just with the Benz
Checkin' out, never checkin' in
We been outside, not goin' in Was it for the image or for the pictures?
You always seem to show up when I'm at the mixes
Cause you know I'm not myself when I'm off the liquor
Off the lean, it's always better off the lean

21, 21, 21, 21
All my niggas outside, pillow talkin' sneak dissin'
Gettin' nigga a job, why?
Beat you baby mama throat so long she say "your jaw's tired?"
Young Savage get a nigga whacked cause I got mob ties, I'm a wise guy
All my niggas in the field, I'm draped in that Biani, I ain't got a deal
Slaughter Gang and PDE, we killin' shit for real
10 bad bitches suckin dick and eatin pills
And I keep that Tommy nigga, and I ain't talkin' Hil
And I be on mud, I get mad if it spill
Bitch I know your baby daddy probably wanna kill
I"m a real nigga Fuck niggas can’t feel
Plus I get inside that bowl and skurt skurt skurt
Hit it from the back pull up and skurt
I just copped that Bentley truck I skurt skurt skurt
Bitch I’m outside on the percs, percs, percs